The smoke got out

Electrical things run on magic smoke. The electricity keeps it in, once the smoke gets out, the systems ceases to function. The smoke got out of this service panel:

Doesn’t look too bad, does it? It is plenty bad. Testing across the two hot legs gave me 120v, which would have been ok, except it should have been 240v. Oopsie. 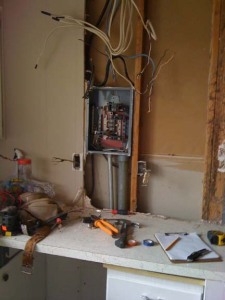 This is the next stage….(BTW, that bundle of white wires at the top of the photo is a WTF, they weren’t tied in, and don’t seem to go anywhere. Same thing with that 6/3 exterior service cable at the top of the photo. They weren’t in the box, so your guess is as good as mine. They are not powered, don’t seem to go to anything or serve any real purpose. WTF?)

Another view of the mess………that open hole in the lower left was a plug. I stress was, because it had caught on fire in the overload.

Shiny new service panel installed, service reconnected. Those two black and white wires at the bottom contain the magic smoke. Another WTF….see that silver conduit in the bottom center of the photo? No wire in there. I have no idea. 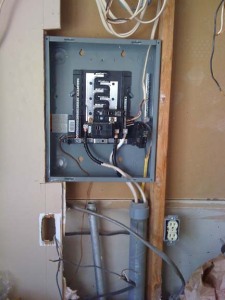 A better view of the wires that serve no purpose. That big black snake on the left is the 6/3 service cable that services nothing.

HINT: Your wires should NOT look like this. This is what happens when you seriously overload a circuit. Just don’t.

Oh yeah, one of those pieces of blue romex you see at the top of the photos also goes nowhere. I am not sure what the original contractors were doing, but I think drugs might have had something to do with it. I have to sort this shit out, run four new circuits to take the strain off the overloaded circuits, and do it without getting the snot knocked out of me while working in a hot panel. Just another day at the office.

This entry was posted in Uncategorized. Bookmark the permalink.

1 Response to The smoke got out